Construction of a Spot

One of the other big highlights of my time in Viña del Mar was my last day with the Parkour School. That day the “training session” was a bit different than normal. After a delicious home cooked meal with his family, Carlos and I stopped by the hardware store to pick up some metal wire before heading over to the meeting spot. We arrived to find the motley band of Friday “usuals”, plus a few more that had come along to help out after hearing that it would be a “abnormal practice session”.
﻿﻿﻿ ﻿﻿﻿ After a quick bus ride to the edge of town and a short walk up a dusty unpaved road we made our way to the entrance of the “Secret Spot”. I had been to this spot the week before for one of the classes and had been struck by the ingenuity of the location. It had started as a small clearing surrounded by an impenetrable mass of trees, blackberry brambles, and thorned plants that look like something taken out of Sir Arthur Conan Doyle’s Lost World or the “Avatar” film. A few months earlier Carlos and some of the other traceurs had cleared out the clearing and made a few obstacles out of fallen trees and loose branches. The surrounding wall of foliage and 5-inch thorns ensured that one could practice in peace, and could enhance the spot without having to worry that random trouble-makers will come to destroy one’s handiwork.
﻿ ﻿ The objective of the day was to improve the spot, and although I knew this going in, I was rather surprised by the way that Carlos gave the directions. I was expecting something more calculated and directive than the simple instructions of “Today the goal is to make your spot better. If you see something that you’d like to add or change, do it. If you need help, ask for it. Work together to build your spot.” I was pretty apprehensive about how much “improvement” would result from a load of young teenagers armed with a hammer, a saw, a bag of nails, some metal wire, and a bunch of old computer cables. However, by the end of the day I was speechless. 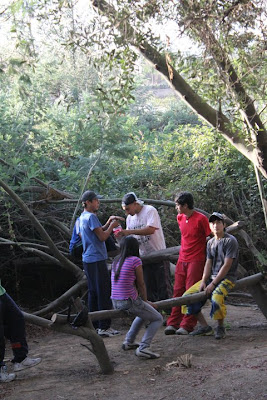 The kids all set to work immediately in different areas of the clearing to work on their visions and while wandering around watching them I spotted the perfect spot to rig up a series of lachées (I hadn’t yet been able to find a suitable spot to do lachées during my time in Viña and missed real scaffolding to swing on).

﻿ ﻿Carlos and I set about finding suitable trees to build it and ended up enlarging the clearing a bit at the same time (the only time that I saw Carlos or any of the kids depart from the “leave no trace” attitude, which seems to be very strong in Viña). ﻿ ﻿ When Carlos and I emerged 20 minutes later drenched in sweat and carrying 4 small trees trimmed and cut to specifications, we found that in our absence the students had already set up a number of obstacles and were busily hammering and sawing away. I enlisted a few of the more curious ones to help with the lachées, something that was really intriguing to them since it was relatively unexplored movement, and was pleased to find that they didn’t hesitate to offer advice or ask questions about what was going on.
﻿﻿ ﻿﻿﻿ ﻿
After an hour and a half, covered in sawdust, sap, and sweat, we stepped back to look at our handiwork. What had been a decent spot before was now one of the best spots that I’ve trained in on my trip so far- complete with a seemingly infinite combination of vaults, lachées, kongs, and precisions of all variations. While I have a special affinity for training in the forest and in trees, this was beyond my wildest dreams.
﻿ ﻿ ﻿ ﻿﻿ ﻿
Unfortunately we only got to train on it for a little while since Carlos and I had to get back to his house to change, shower, and pick up our stuff before we headed to the train station for an all-night bus ride to La Concepcion (next post).

﻿﻿ ﻿﻿﻿﻿﻿ ﻿﻿﻿ The best part of this experience was not the fact that I got to live my childhood dream of making a play spot in the woods outside the jurisdiction of parental control. Instead it was the fact that I got to witness firsthand the effect that the “class” had on the students. Not only were they getting the positive physical effects of parkour, but I felt like I could see them growing and maturing before my eyes. By giving the “students” the reins in the creation of the spot, Carlos had effectively ensured that they would be invested in its responsible use and upkeep. It was not just one more spot to train parkour, it was “their spot” that had resulted from their own sweat and hard work. While I doubt that this experience could be repeated in many of the places I’ve visited (going into a public park or forest and cutting down trees isn’t exactly well received in many countries), I think that it can serve as an example of one of the non-physical positive effects of parkour. It also seems like it is an activity/lesson that can be custom-tailored to specific countries and locations as needed, since the act of a “creating a spot” doesn’t necessarily require a fortified clearing in the middle of nowhere or cutting down trees (lots of abandoned urban locations are ripe for “parkour modification”.) 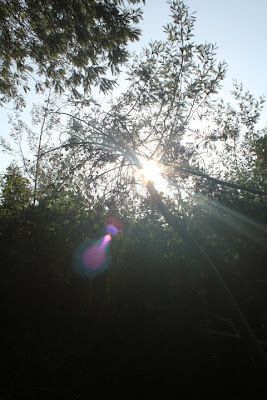 *Photo credits to Carlos and the other members of the Parkour School that picked up the camera throughout the afternoon.*
Posted by Blake Evitt at 11:50 PM