After an 18-hour bus ride from Rio I arrived in Florianopolis realizing that I had no idea what the guy I was supposed to be meeting looked like, and without any credit on my cell phone. I wandered around the station for a bit before deciding to hang out in the most visible place possible and hope that I looked gringo enough for him to recognize me. Thirty minutes later I saw a guy with baggy sweatpants and a parkour shirt walk into the station and knew that he must be Kalebe, my contact.

Kalebe is one of the more experienced traceurs Brazil and was among the first group of young Brazilian guys from around the country that was instrumental in making Brazilian parkour into what it is today. The week that I spent with him seemed to fly by and a lot of it was spent getting the “insider’s perspective” on life in Brazil. It certainly felt good to be in a “normal” living environment again after spending the past 4 months living in hostels. Even though we didn’t attempt any culinary masterpieces, it was nice to have a proper kitchen and not have to fight 50 other people to make a simple sandwich. Since Kalebe is in university at the moment studying physical education*, I also got the opportunity to tag along with him to see what Brazilian university looks like.

*Since this is a concept that comes up repeatedly during my stay here, I should elaborate. Here in Brazil, one needs a degree in physical education in order to coach or instruct sports at any level. While this creates a major barrier for the creation of parkour classes at the moment, it also means that the people that are teaching or coaching sports have much more expertise and better training than in other countries where one can essentially start coaching with no experience or knowledge whatsoever.

Kalebe spent a lot of time showing me around the city, especially the 40+ beaches that surround it. Since he’s a big surfer, he has a special affinity for beaches and it was really interesting to hear about the sport from a longtime surfer. As he also works as a surf instructor on the weekends, I went along with him on Saturday to spend the day at the beach climbing around in the rocks while he gave lessons.

As it was the week before Carnival (huge deal in Brazil), there weren’t many guys training in the area, so most of the training I did in Floripa was with Kalebe and his roommate Niko, or in the gym where Kalebe worked. Since Kalebe had work each night from 5-9, I spent a lot of time at the university gym hanging out with him and his boss, Wladamir, who also happened to be one of his professors at school, unofficial strength trainer, and good friend. Wladimir’s model for the gym was very different from ones that I have seen back home and the whole experience was very different from what I had gotten used to at Davidson.


I also I found that it did a much better job at guiding the clients in developing their general fitness than the local gyms that I’ve been to in Boston. Each client was given an account in the computer system upon registration and whenever they came in they would have a new workout waiting for them that had been prepared by Wladimir based on performance in past workouts and personal goals. Throughout the course of the workout they could access any of the computers stationed throughout the gym to input their progress and see examples of the assigned exercises. Kalebe and the other staff were on hand to make sure that they were doing the exercises correctly and to provide coaching/encouragement. Overall, I found the gym to be a much more friendly and inviting atmosphere than many of the testosterone-charged arenas that pass for gyms in the States. While I have nothing against this atmosphere and personally like the competitive air, I feel that many “normal” people may get intimidated or turned off by this atmosphere or the massive guy staring at himself as he does bicep curls in front of the mirror.


Due to all the time that he spends in the gym and the fact that he has the educational experience, Kalebe has developed a way to do a lot of his parkour training in the gym. While he was recovering from an injury a while ago he and Wladimir worked to develop different weight-lifting routines in order to develop or improve certain parkour movements, and although I only got a small glimpse of this training I was pretty impressed. I’ve been curious for a while about the potential benefits of weight-lifting for parkour, but I’ve found that most of the traceurs I’ve met, with the exception of a few in London, are convinced that all of their training can be, and should be, done outside. While I’m not saying that either party is right or wrong, I do think that there are a number of potential benefits to a properly designed strength routine for parkour. I will also admit that I tend to approach the strengthening and conditioning for parkour the same way as I’ve done for years with competitive athletics/track & field; with a lot of strengthening exercises and conditioning to keep strong and develop certain techniques.

In addition to the gym, Kalebe took me to a few of the parkour training spots in the city, although my parkouring was pretty limited during the week due to a wrist injury that has been plaguing me for the past few weeks and a feeling of general fatigue. 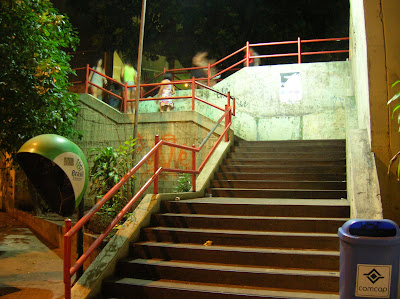 My last night in Floripa (and the first official night of the Carnival weekend) Kalebe and I went out to a rodízio and decided that it would be much more cost-effective (and a challenge) to get the tower of beer to go with our meal instead of individual glasses. Two hours and 3.5 liters of beer later, we walked out of the restaurant very satisfied and slightly inebriated. 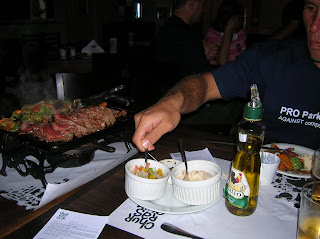 Since Carnival was now upon us and Kalebe had to work at the beach giving surf lessons for most of it I headed to Balneário Camboriu to meet up with some of the guys from Curitiba…
Posted by Blake Evitt at 10:26 AM