The second SOTF race was held in jolly old England at Nottingham. Since I had convinced two friends from my parkour classes to do it with me, it was quite a different experience from the last one and really reminded me how much more fun it is to travel with other people.  James, Fizz and I drove to Nottingham on Friday afternoon and picked up our numbers and timing chips before crashing at Al and Dee's (old friends of James). Dee cooked a delicious pasta dinner for us to carbo-load for the next day (an impressive feat since we were all starving from the car ride), and then we spent the rest of the evening hanging out and swapping stories.

Saturday morning we drove to the course and after a quick warm-up I headed to the line for the first heat/wave. I made sure to position myself at the front of the start this time to avoid the mass-pile-up at the hay bale stacks 100m later, and found myself among the top 10 by the 1 kilometer mark. The top 3 disappeared after 2km and left the rest of us to battle it out the rest of the race. Since the obstacles didn’t change much from the last time I definitely felt more comfortable going through the course (it was also shorter, only 10km this time), but felt pretty lugubrious until I got to the river section. This was the one major addition since the last race and was made up of a big water slide into the river followed by about 100m of wading/swimming through the river (remember, this was in England, in October, so it was just about ice-bath temperature). The shock of the water actually helped to wake me up and get my head back into the game so as we started out again I began eating up the distance between myself and the front of the pack. 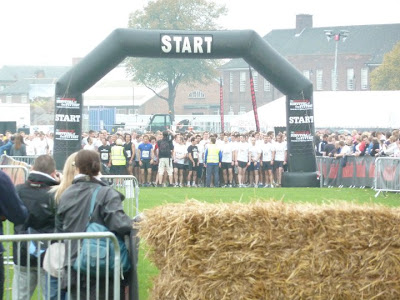 The start line, I'm in a black sleeveless top on the left.

The scramble over the hay bales, these are the first sets to break up the pack before the taller stack. 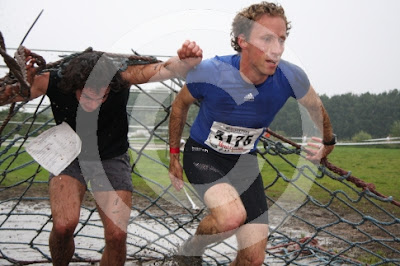 Struggling through the net, still feeling kind of slow (I got this guy later). 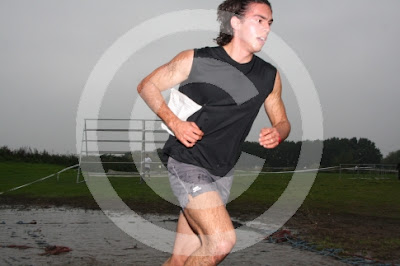 Finally out of the net. 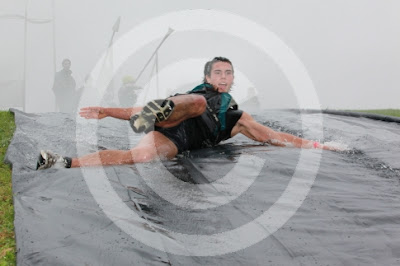 Going for the "sexy pose" on the water slide.
I managed to wrap a few people up in the ensuing 4km and spent the final kilometer trying to catch the #5 guy right ahead of me. Unfortunately I kicked too late and wasn’t able to catch him so finished 6th in my heat, which ended up being a some-what disappointing 11th overall after some guys in later heats beat my time. After an ice bath and cool down I hung out with Fizz and James as they warmed up for their wave at 12:45 and made a few passes at the “free samples” booths to get lots of stuff that I have since realized that I didn’t need.


--Video of the final sprint to be inserted soon-- 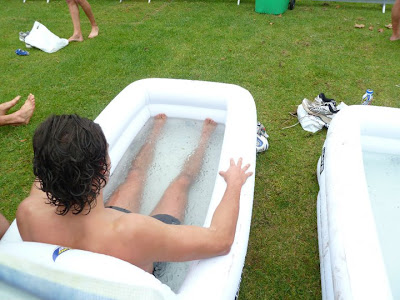 Post-race icebath so I can do it all again the next weekend
While Fizz and James were racing I played photographer got some nice shots of them leaving the gates all neat and clean in their white shirts and coming back to the finish looking quite a few shades darker. Both finished extremely well, especially never having done something like this before, and I think Fizz might even have “caught the bug” by the end because she definitely had a glint in her eye coming down the home stretch. 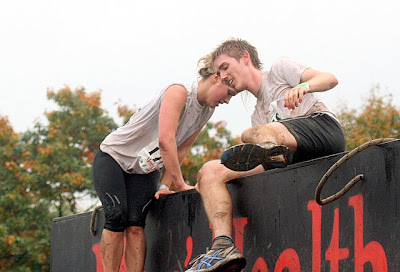 Fizz dominating the Wall of Fame 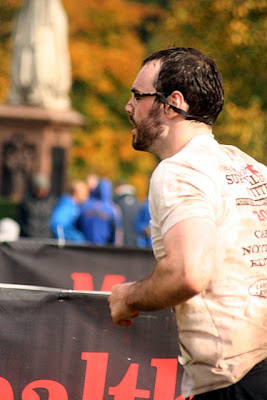 James bringing it down the home stretch 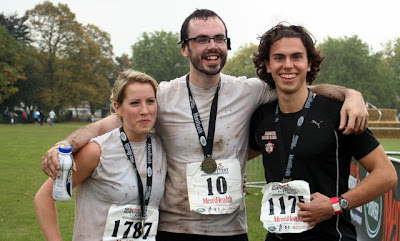 The triumphant and tired post-race shot.  (Yes, I did actually run it, despite the fact that I look a lot cleaner than them)
Special thanks to Fizz and Dee for the pictures!
After a quick stretch and another pass by the free samples table we headed back to Al and Dee’s to change clothes and trade massages. We had planned to go see Nottingham but by the time we had finished Dee’s delicious pizza dinner we were too tired and lazy to go. We spent a few hours basking in that “post-race” afterglow and playing with candles before heading back to London and crashing at James’s place.  Then headed to "Weekend Wakeup" practice the next morning.... 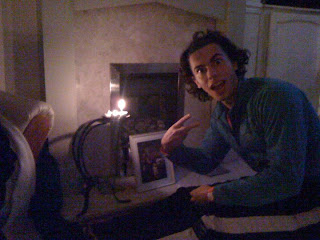 Keep away from fire: potentially flamable
Posted by Blake Evitt at 11:35 AM