The “Weekend Wakeup” class on the Sunday after the Nottingham race was held in conjunction with the Parkour Generations booth and activity area that had been set up in the event village of the big Hyde Park Half Marathon event. This meant that not only did we have a big open space with lots of equipment, (they set up a bunch of gymnastics equipment and the portable scaffolding apparatus from the gym) but we also had lots of passersby to stop and stare. 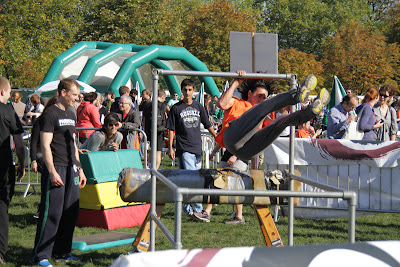 Having fun on the scaffolding (photo courtesy of Bruno Peixoto) 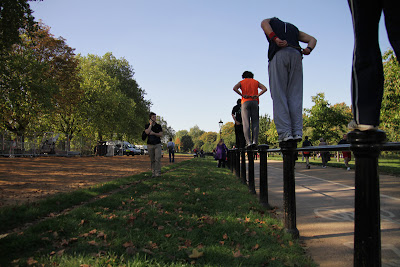 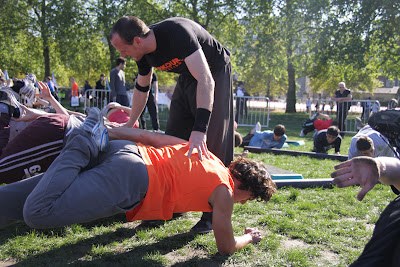 A little "help" from Dan while doing conditioning exercises (photo courtesy of Bruno Peixoto)
The class was great, and although it was kind of weird to have spectators at first, I forgot about them as soon as we got moving. The weather was an atypical beautiful London autumn day, with bright sunshine, a not-too-warm-but-not-too-cold-either temperature and not a cloud in the sky. The class ran from 11 to 1 and then a lot of us stayed to hang out and continue “training” on the equipment. I write “training” because what it really felt like was playing. Maybe this was because we were soon joined by lots of kids that wanted to try it out as well, but it’s more so because of the general feeling of festivity and leisure that pervaded the entire day. Maybe it was because of the constant “monkey see, monkey do” antics, or the plethora of free samples of anything from sandwiches to hand wipes that were to be had all over- whatever it was, it felt similar to that warm fuzzy feeling that comes with a summer picnic in the park with friends. I may be drawing too many connections to the carefree daysof childhood but that’s certainly what it felt like. Just one more example of how important and influential the “parkour community” has become during my stay here in London… 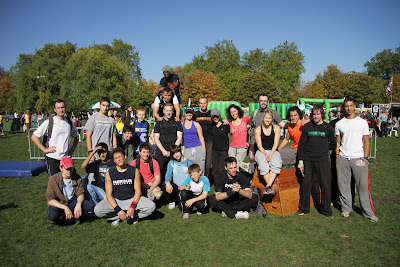 The people that were up bright and early Sunday morning to train (photo courtesy of Bruno Peixoto)
Posted by Blake Evitt at 9:19 PM