This past weekend was the final event in a series of “Survival of the Fittest” races that I’ve been participating in. These events are organized by a company called the Rate Race and have been building in both size and reputation each year since their debut in 2008. As a company, the Rat race is actually pretty interesting, and it puts on a number of events designed to get urban dwellers out of their nests and be active in thier environment. They put on a number of events in London, including an “Urban Adventure” event that combines, running, abseiling from landmarks, and kayaking in the Thames. Pretty cool, for more details on the variety of events that the company puts on, see their website here.

Back to the racing. I signed off for the entire series of events, meaning that for the past three weekends I’ve been exploring Britain in a “not-so-typical” manner and getting up close and intimate with all types of British dirt, grass, pavement, cobblestones and mud. The first event was held in Cardiff, Wales, and was my debut on the survival circuit. I mentioned in an earlier post that I did an “Urbanathlon” race in Glasgow in preparation for these events, but that wasn’t anything close to the SOTF races. First of all, the scale was entirely different. Glasgow had 300 racers and some less-than-challenging obstacles. Cardiff has 2500 racers and was full of “legit” obstacles. The SOTF races have also be very well organized and well-planned, a seemed to put the emphasis on having a great time and promoting general fitness instead of raising money for a cause/company.
Since I wanted to get a chance to see a bit of the Cardiff scenery I took the bus over a day early. After registering for the event, I put on the tourist gear and went to check out the major landmarks of Cardiff (Millennium Concert Center, Millennium Stadium, and the highlight of the trip - cue majestic music - Cardiff Castle). Standing there looking at a real castle after growing up dreaming of them was somewhat surreal but very enjoyable and I spent a lot of time exploring the park surrounding it. After a sub-par pasta dinner at a local pub watching the rugby game, I hung out at the hostel before calling it an early night (This hostel was one of the better ones that I’ve stayed at- complete with hammocks in the living room, an in-house restaurant & bar, a BIG free breakfast, nice rooms, free lockers, great location, and low price- not much more I could ask for beside a busload of single female Welsh university graduates on fall break). 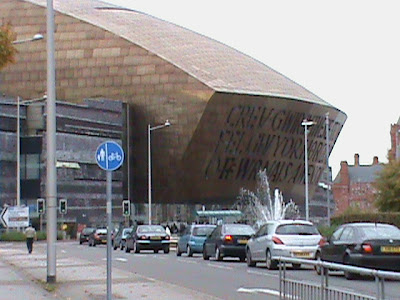 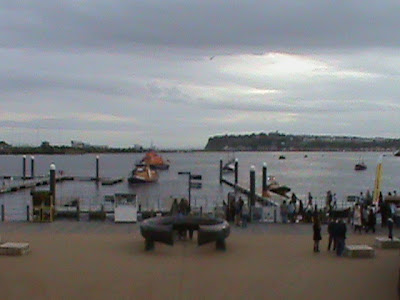 The huge tortoise-shaped dome of the Millennium Convention Center, and the view from the pier right next to it. 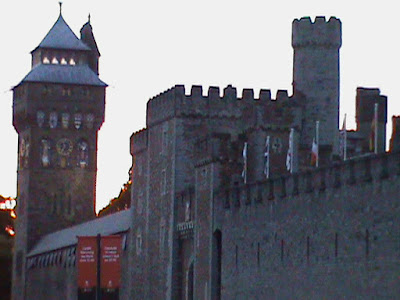 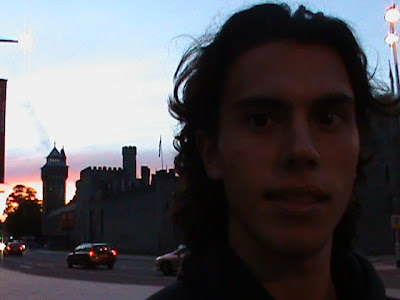 The Castle at sunset, with yours truly in the foreground (I needed proof that I was actually there).
Race day I took advantage of the BIG free breakfast and then walked over to the event village. One of the nice things about these races was the event village. Since 2500 runners couldn’t be released on the streets of Cardiff at the same time we were loosed in waves of 250. This meant that the race village was not only packed, but there was a great atmosphere and plenty of entertainment. The course itself was spread out over 12k and included obstacles at roughly every 1km. Obstacles were pretty varied but included a set of hay bales to clamber over, a “parkour zone” with walls, scaffolding, and jumps (little ones, nothing too intense), big inflatable obstacles courses (the type that normally don’t let adults on in the carnival), a stair climb in the stadium, and the 8-foot”Wall of Fame” right in front of the finish. Despite a slow start I finished 5th in my heat and 6th overall, which, although I didn’t get any of the bubbly, was pretty decent for attempt #2 at this new type of race. 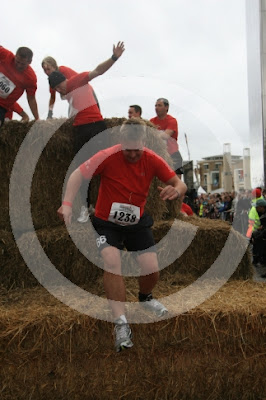 Obstacles #1: the Haybales (obviously this is not me but apparently I was too surrounded by the Welsh rugby team for the photographer to get a good shot) 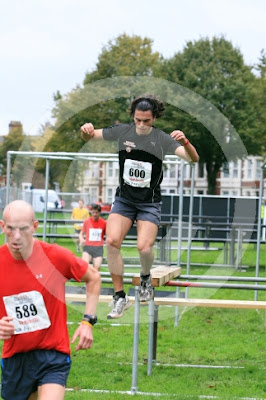 The "Parkour Zone":  Not exactly challenging compared to what I've been doing the past 4 months 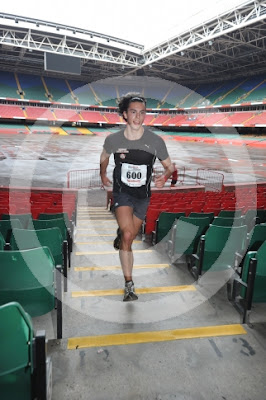 The "Stadium Climb": Not the most bad-ass of facial expressions but I was about to catch the guy in front... 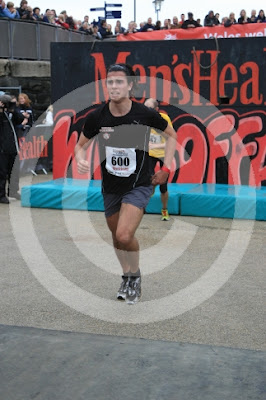 Note: Special thanks for the RandR Photography Ltd. for the over-priced photos.