The final results were posted today, apparently compiling the data from the racing chips was too hard to do in less than 48 hours…

The top 5 finishers of the ~300 people entered were: 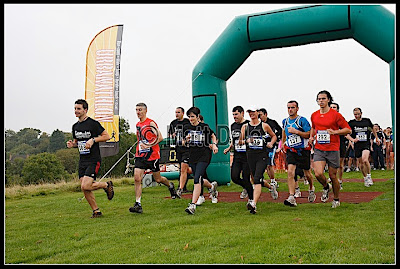 The start of the race (I was in the first wave of 15 runners). Unfortunately the photographer wasn’t fast enough to get any pictures of the leader or I after this.

Thoughts on the race (and Glasgow):

- It was one of the hardest courses I’ve ever run. The entire 8k course had a combined total of 400m of flat terrain, and my workouts leading up to the event definitely did not prepare me for the Scottish hills. I will definitely be doing some hill workouts before I head to Edinburgh for the last race. That said, the rolling hills and forest that the race ran through were beautiful and it was hard to believe that we were so close to “civilization”.

- The obstacles were not very difficult at all, and I actually would have liked more as I was able to make up ground on the leader on most of them, only to lose it again as he scrambled up the hills in his trail-running shoes. While I know that the next races will have more formidable obstacles, I think that the parkour training over the last few months has me very well prepared for them so I’m hoping that I’ll be able to sort of catch my breath from the running part for some of them.

- While this race was not the best-organized or biggest race I’ve run, there was a distinctly friendly “Scottish” attitude throughout, which was not at all hampered by the drizzle that came and went all day. While I wasn’t impressed by the timing system or photographer, the actual run was well staffed and everything ran relatively smoothly.

- And Glasgow… A city that seems to be as architecturally diverse as London, but with more of a gritty and industrial feel. This contrasted sharply with the green hills and grazing sheep and cows that we passed on the bus ride up, but gave the city a distinct flavor. I can’t tell if this was more of a “Scottish” flavor, since many of the Scots that I met seemed to have a weathered air about them, or if it was a Glasgow-specific thing. The fact that I was there for Friday and Saturday nights meant that I saw a lot of drunken people and scantily clad women, but besides a noticeable increase on the amount of makeup on many younger women, it could have passed for a rowdy night in London. I was also struck by the lack of diversity in the city, although I think that this is primarily because I’ve been spending so much time in London. I would have liked to be able to go explore some of the nearby castles and museums, but didn’t have the time, money, or energy to do so after the race. All-in-all, it’s definitely someplace that I’d like to have a few more days to explore, especially during the “non-rainy” season (if that exists). I’d say that the weekend trip was a success and definitely worth the 18 hours that I spent on the bus over the course of the weekend. 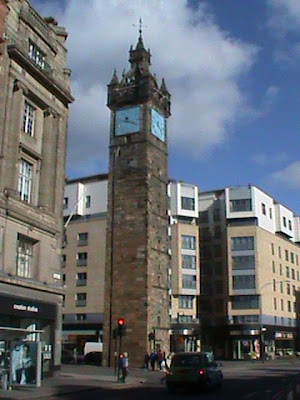 Some of the more interesting architecture of Glasgow. 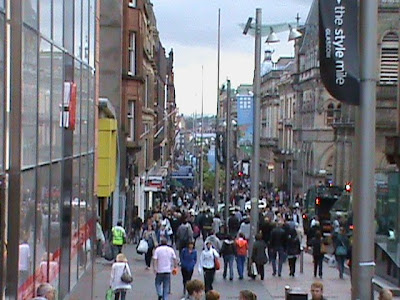