So I realize that I’m writing about this post a month after the event took place but it has taken me a while to totally digest the action-packed few days that were “Rendezvous 5”. This event, which took place on August 14th and 15th and was hosted by Parkour Generations in the Southbank region of London (near Waterloo Station in London), was a sort of international gathering of traceurs, similar to the ADD Experience that I went to in France this past June (see first blog post). The weekend included 2 full days of training sessions, workshops, group discussions, and general networking with traceurs from around the world, but with a special focus on those from throughout the UK. While the activities and training was great, the thing that made the event so special was the atmosphere that pervaded the event.

The logo of Rendezvous 5, designed by Andy Pearson.

After having endured several weeks of veterans hyping the event, I was both curious, and I’ll admit it, a bit apprehensive about the event. After the ADD Experience in France, I figured that I had been to the best parkour event possible and couldn’t see what the Brits could do to equal it. In retrospective, I think that this might have been due to the fact that I hadn’t quite come to understand the depth of the Parkour Generations organization yet, and also because I was (am still am) fiercely loyal to the group of people that “introduced” me to parkour.

The event started early Saturday morning with a group warm-up session on the roof of one of the big theaters in the Southbank district. The group size was impressive in and of itself, with more than 150 people showing up to the first day’s events. The participants ranged from veterans who had started practicing 7+ years ago after the first videos and documentaries came out, to people that had heard about the event from friends and had decided to try it out for the first time (needless to say, they were pretty sore after the first day). As usual, the diversity of nationalities was also impressive, with lots of people flying in for the event from all over Europe, with strong representation from Italy and France. The event also featured special guest instructors from abroad, with Laurent Piemontesi (the Yamakasi founder who I trained with last summer and who had a profound effect on my interest in the philosophy of the sport) coming in from Italy where he is establishing a parkour academy; Sebastian Foucan (James Bond: Casino Royale); Chau Belle-Dinh, Serika Kingman, and a few other members of the Yamakasi/Majestic Force/ADD Academy team; and a number of Parkour Generations “ambassadors” who seemed to reconvene from all corners of the world for this event. 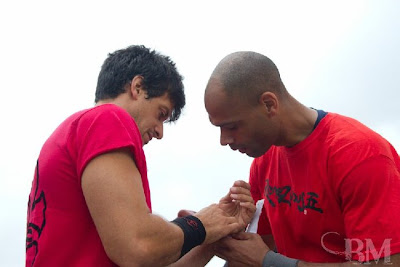 Yamakasi founder Laurent (left) and co-Director of Parkour Generations, Forrest (right). Two people who have had a huge influence on my training and development in parkour. 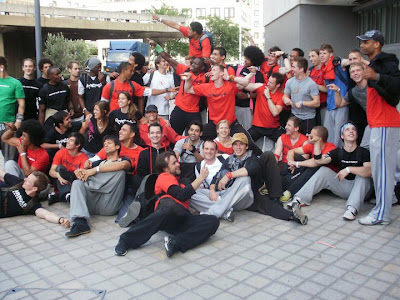 The instructors- it would be hard to find a more talented or open group of people.

After a grueling warm-up led by Châu and the Majestic Force guys, the participants were divided into groups based on skill levels and sent to different locations around the Southbank area. We spent the rest of the day rotating among the different instructors in our small groups, with each “station” working on a different skill set, usually with a heavy influence from the particular instructor’s personal style. After 8 hours of training, many people headed back home to recover in time for the next day, while the “hardbodies” (or masochists) met up again after dinner for a “night-training” session. Slightly different from a typical training session, practicing at night in an abandoned housing project definitely gave me a new perspective on movement and a lot of the things that one doesn’t think about in broad daylight. The entire 2-hour session was conducted in compete silence, from the mimed warm-up to the “follow the leader” challenge that took us through the 3-acre estate. I’m convinced that if we had attempted this in an inhabited housing development someone would have called the police, but the fact that the windows boarded up, there were no barking dogs or murmur of voices, and even the traffic seemed muted by the dark and abandoned towers around us. This environment amplified every sound and made us painfully aware of the scrape of trainers on a misjudged step, the thump of landings not made on the balls of feet, the clap of palms that missed their marks, the scuffle of leaves underfoot, or the muttered curses that escape when the overhang jumps out from nowhere to attack one’s head. Since moving efficiently and smoothly ideally involves very little noise, this night exercise was a great way to make one aware of corrections that needed to be made. 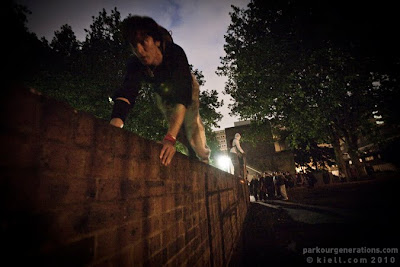 Stephane Vigroux, one of the instructors for the night training session. Photo courtesy of Andy Day Photography.

Sunday morning saw another early start (it felt especially early for those who had just gone to bed after getting back from the night session) and full day of training with the different instructors and trying to absorb as much of their knowledge and the general atmosphere as possible. 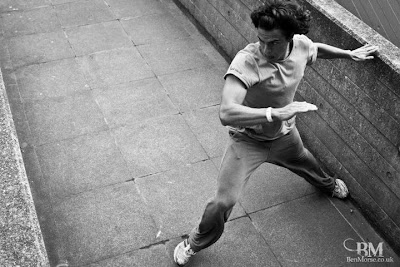 The first official picture of me actually doing some of the stuff I’m writing about.

One of the most striking things about this weekend for me was the spirit of community that seemed to pervade all the events. While the atmosphere had subtle differences from the one that I encountered in France, (one might chalk that up to one being French and the other British), the spirit of cooperation, unity, and pursuit of the common goal of personal development and general fitness were the same. These events really seem to be the glue that binds a lot of these organizations together. The friendships and mutual respect that are forged by two days of blood and sweat seem to create a “community” aspect to parkour that I think stems from the inclusive and progressive philosophy of the sport. An example of this is the accommodations set up for the event, with all of the “imported” instructors being hosted by Parkour Generations team members, and many of the foreign participants staying with friends that they had made at previous events. 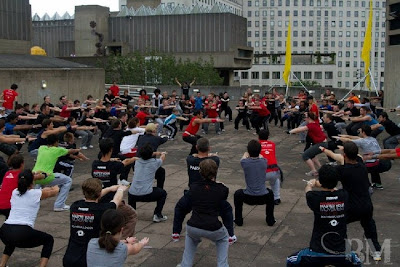 The warmup at RDV5 (Photo courtesy of Parkour Generations)

Maybe it is the stark contrast with the individualistic aspect of the sport that makes this sense of community so striking, but it gives me a lot of hope for the development of the sport, and the desire for it to outlast the labels of “fad” or “fashion”. Much the same way that the sport of Frisbee can only be played as long as the “spirit of the game” is respected, parkour seems to depend on this as well. Not only do traceurs have to keep the reputation of the entire sport in mind when they practice, since one incident with an unhappy resident or damaged private property can result in a city-wide ban on the sport or an unfavorable view in the eyes of authorities, but also because so much of the development of the sport seems to depend on the sharing of knowledge and experiences- moves, techniques, conditioning exercises, practice spots…

Perhaps one of the best ways to capture the attitude of this weekend is with the phrase that became the mantra of the weekend, “We start together, we finish together”. Originally taken from the Yamakasi expression “On commence ensemble, on finit ensemble”, it not only describes the general practice of waiting for everyone to finish the set/route/rep before continuing as a group, but also of a state of awareness for the safety and well-being of the others that one is training with. 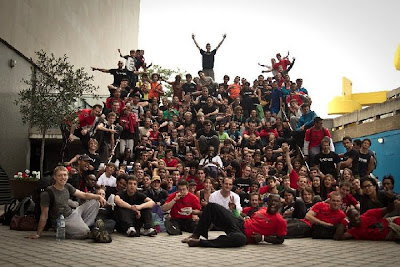 Rendezvous 5: I’m in the top left, sporting a bright orange shirt and the usual tousled mane.

For more pictures of the event (there are a lot of great ones) check out Andy Day's shots from the night session HERE or pics from the Parkour Generations site HERE.
Posted by Blake Evitt at 2:54 PM