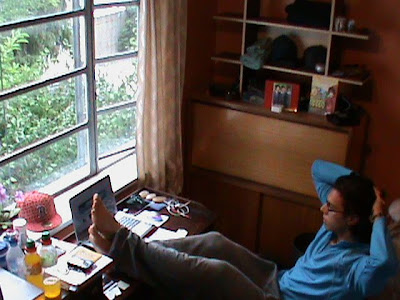 Dreams of spending long days staring out the window and contemplating the complexities of life… are still dreams.

Despite my best efforts here, life seems determined to speed up, and the past few weeks have been pretty busy. This isn’t necessarily a problem, I like this speed, and I feel like I perform best at it, but I just wasn’t expecting it to get so busy so quickly. And of course the side effect is that certain things end up falling by the wayside as a result (i.e. keeping in touch with family and friends back home, keeping up with the blog, knowing anything about current events or popular culture...)

So what have I been doing the past few weeks?

Well, I’ve been training- a lot. My landlord’s frequent observation when I finally get back to eat dinner at 11pm might sum it up best, “You’ve been at practice all day again? Aren’t you tired after doing it all day?” After struggling for a few weeks to get enough rest and not over-train (which resulted in the concrete bite-mark on my shin shown in the previous post), I finally seem to have found a sort of balance in my exercise program.

Finding this balance (a development of the last month) has made me conscious of how far I’ve come in the last 2 months. It’s kind of unsettling actually; with running I had become so used to measuring improvement based on the results of a stopwatch I never took the time to notice how I felt doing non-running movements. With parkour it’s been hard not to feel the changes. It’s not that I’ve gotten bulkier (this isn’t exactly a sport for the Hulk, so yes, all my clothes still fit), but I have noticed the appearance of muscles that I definitely did not have at the end of track season a few months ago. Usually I discover them as I struggle to get out of bed the next morning or find that I can’t turn the tap without wincing due to a muscle that “never hurt before”, but is now making strong complaints about yesterday’s workout. That said, I certainly feel a lot stronger than when I arrived. Yes, part of that can be attributed to the fact that I’ve more comfortable with many of the movements, but there are only so many “muscle-ups” or “Japanese pull-ups” that you can credit purely to improved technique…

Demonstration of a muscle up... no, this is not me.

When I was asked during my first class in June to walk along a short metal railing about three feet off the ground I made two steps before falling off. I got back on, and made one step before finding myself in the grass again. This continued along the length of the railing. I know that distance runners are known for their less-than-spectacular balancing abilities (like with a bike, the faster you go, the less you have to worry about balancing, especially if you’re traveling on a track), but compared to a lot of the other people at the class I felt like I was learning to walk again. Late last week, feeling a sense of déjà vue, I found myself back at the same railing. This time I was walking along it confidently, walking backwards, doing a full turn every 5 steps, and adding in a one-legged squat just for fun. Although the revelation doesn’t usually hit until the train ride home, this sort of noticeable improvement is becoming more and more common and I give a lot of credit to my instructors.

The support network here at Parkour Generations has been pretty impressive. While the level of intensity and drive is different from in France (I will be hard-pressed to find a group of people who consistently train with as much passion and intensity as the Yamakasi and the rest of the Majestic Force team), Parkour Generations has shown themselves to be unrivaled in their superb organization and great positive attitude. Founded in 2006 by Dan Edwardes and Francois “Forrest” Mahop, today Parkour Generations has arguably become one of the two most influential parkour organizations in the world, alongside the Yamakasi and their label, Majestic Force. There is a positive and constructive attitude that underlies all of the activities here, from the 40+ school instruction programs that the organization runs, to the international gathering that it recently hosted (more about that soon in a upcoming post), to the daily classes that it runs that are open to pretty much anyone. This attitude is not only fostered as a way to keep up the “good face” of the sport, but also seems to be something that parkour brings out of people. This is shown in the evolution of Parkour Generations from a small London-based training group to a nationally accredited organization that that led the creation of an international standard in parkour instruction, but it is better witnessed in the stories that I have heard from fellow athletes about how the organization, or the sport has changed their lives.

This is one of the reasons that I have decided to prolong my initial departure date at the end of August until the end of October. I realized that London is probably the best place for me to establish a base knowledge and proficiency in parkour so that I can safely complete the rest of my journey. And the fact that I have a living arrangement that fits well within the narrow confines of my budget, lots of people to train with, and a big city to explore is just icing on the cake.

For those that might be worried that I’m spending all of my time practicing- don’t worry. I’ve also managed to see some of the sights of London and to take some time to wander around this amazing city. At the suggestion of a fellow traveler (who was full of good ideas) I treated myself to a show on my birthday. I ended up seeing “Into the Hoods”, a hip hop adaptation of the Grimm fairy tales, complete with a breakdancing Little Red Riding Hood, a drug-dealing Giant at the top of the “beanstalk”/projects, and a DJ-ing Jack. Even without the bias I have for anything with good dance moves and music (which might explain why I liked Step Up 3D so much despite its complete lack of a plot), I thought that the show was a great re-interpretation of an age-old story. The mix of good “British humor”, overlayed onto good beats, and a fresh storyline made for a pretty great performance. I actually enjoyed the whole “theatrical experience” so much that I’m already trying to figure out how I can see another show, although the ticket prices will mean that I’ll have to get creative. 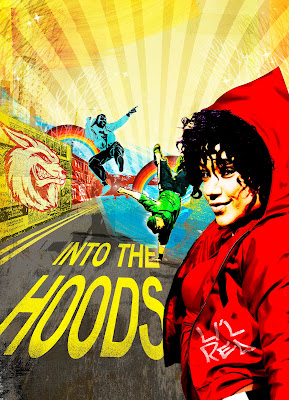 Speaking of dance, I also recently started taking capoeira courses at a local dance studio. I don’t want to go into too much detail yet, since I’ve only been to two practices, but I’ve found a lot of similarities between the movements of a capoeirista and a traceur. It’s also been a great way to kind of do some “crosstraining” since it doesn’t involve the impact of parkour but is a great workout and works the muscles in a different way. I’ll elaborate further once I have investigated some more.
Posted by Blake Evitt at 6:50 PM