I realize that my blogging since my arrival in London has been mediocre at bestbut now that I have finally settled down for a while I’m trying to get back into gear.

One of the reasons for my lack of blogging was that I was trying to manage bouncing around between hostels while trying to find a more permanent place of residence that fit within the narrow confines of my budget. Over the first 3 weeks I got the full spectrum of hostel experiences, with my first hostel being one of the best hostels that I’ve ever stayed in. It had a great atmosphere, a good mix of nationalities, interesting people, a place to store some food in the kitchen, basic cooking equipment, clean showers, bed units with curtains… so despite my being crammed into one room along with 19 other people I had an enjoyable experience. Unfortunately my budget could only handle food or lodging at that hostel’s price so as usual my stomach handled the decision making. 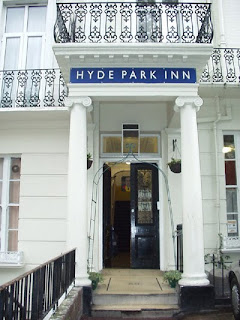 My second hostel allowed for a much more reasonable diet, but that was probably the only thing that improved. It was primarily a “long-stay” hostel, meaning that people would stay for weeks, months, or years at a time (one gentleman in my room had been staying there for 9 years). Besides the lack of toilet paper or soap, and the worn-out look of everything from receptionist to the bed sheets, it was the atmosphere of depression and a soul-sucking lack of hope that forced me to go elsewhere in an effort to preserve my sanity. Everyone seemed to have resigned to this lifestyle and it just seemed like one of those places where dreams and aspirations go to die. After only 48 hours in this hostel I frantically stepped up the search efforts for someplace different.

True to form, my new living arrangement was arranged at the very last minute but has turned out to be pretty sweet if I have to say so myself. It’s located near Wembley stadium in Zone 4, which is only about 45 minutes from the center of London. My landlord is an elderly British gentleman who travels regularly between London, New York and LA but I don’t know much more about him since I moved in on the 18th, and he’s been traveling since the 19th. The house has a beautiful view of North London from the roof as well as a huge garden (with lots of fruit trees) in the back. The garden has become my sort of study/exercise area, and is complete with a fish pond and peacocks. The deal is that in return for a very low rent I spend 2 hours/day feeding the menagerie of fish and birds inside and outside the house, as well as watering the small jungle that is steadily taking up the interior, and the basic maintenance of the garden. This works out well for me because in addition to having my own room and a shelf in the fridge I finally have some sort of “work” that keeps me outside and mucking around in the dirt.

The one drawback to this living arrangement is a distinct lack of human interaction. I’m living with another boarder/gardener, but it’s definitely not the same as the diversity offered by a hostel. I really enjoyed meeting and getting to know the people there, from the crazy Mexicans, to the Texan that managed to convince me (the Bostonian) that maybe the Lone Star Republic isn’t as bad as we make it out to be up north (or at least Austin isn’t), to the small hordes of Italian teenagers that led me to invest in better earplugs, and to the constant flow of Frenchmen that I managed to fool into thinking I was French until about 60 seconds into a conversation. This has sent me into a search for new activities to occupy my time and also to fulfill my quota of human interaction for the day.

So how about the parkour? Since that is what I’m here for in the first place. The parkour has been going great, and Parkour Generations has turned out to be just as well-managed and established as I had hoped. There are classes offered every day of the week but Saturday, so since my arrival I’ve been to about all but 4 of the sessions. I’ve also progressed from the beginner/intermediate level to one of the more advanced ones, and I’m starting to feel a noticeable improvement in my movements and confidence. 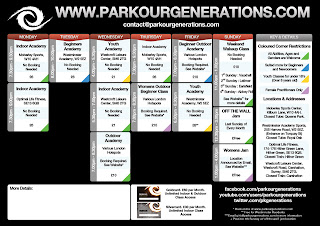 The class schedule offered by Parkour Generations. More details on the classes can be found here.

There are two basic types of class offered by Parkour Generations, indoor classes and outdoor classes. Both seem to have their own groups of followers, and many only attend one or the other (I’m one of a few crazy people that go to both). Indoor classes include lots of conditioning and we spend a lot of time getting comfortable with different movements. Imagine if you moved a bunch of padded obstacles and mats into your usual aerobics classes- lots of stuff to jump over and tumble on, intermixed with sets of squats, push-ups (called press-ups here), ab exercises, and all manner of painful modifications to the normal exercises. Many of the regulars treat it as a fun exercise class, and since all the equipment is fairly soft and forgiving, it makes learning new movements easier. Outdoor classes are a different story. Usually for the more adventurous or hardened athlete, the location of these classes changes between various “hotspots” around the city. These classes focus on the real “meat” of the sport, with lots of jumping, climbing, conditioning, and working on the fluidity of one’s movements. Some spots are gentler than others, and there are one or two locations that will pretty much guaranteed you a few scrapes by the end of the class (or more if you don’t pay attention- see photo below) 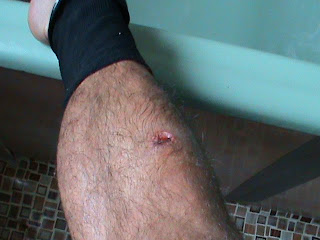 The result (minus most of the blood) of not enough days off, not enough sleep the night before, and not paying attention- hopefully I learned my lesson.

All classes are taught by members of the Parkour Generations team, and many of them also teach classes during the day to the various schools that have parkour PE classes offered. Although I haven’t been able to check out any of these classes yet since I’m focused on my own training at the moment, the adult classes have afforded me a great way to network with other traceurs and people involved in the sport. I haven’t taken any photos of practice yet since I’m always participating, but hopefully I’ll have some soon.

I’ve decided that London is now my new favorite European city. It has all the beautiful women and culture of Paris, except minus the frosty glares. The people are also much friendlier (perhaps due to the heat wave and lack of “British weather” that started upon my arrival), and the city feels like one big melting pot. Unlike Paris and many other large cities that are ethnically diverse, London does a good job of mixing the cultures (at least on the surface). Traveling the Tube is a global experience, since English is often the minority language and it took me 5 days after I arrived to encounter a stereotypical “Englishman”. There is also a very dedicated parkour community here and in the surrounding region, as evidenced by the “Off-the-Wall” events held the last Sunday of every month. These all-day parkour “jams” (noun: a gathering of traceurs that get together to practice) were started by Parkour Generations three years ago, and they include people coming from all over Britain. I was able to participate at the June and July events and both were a lot of fun in addition to letting me meet a bunch of new people. It also gave me a chance to see the extent to which parkour is becoming a mainstream sport here.

One of the most interesting aspects of training in London has been the fact that people don’t really treat us as a circus act and start ooo-ing and ahhh-ing with each jump. Maybe it’s the English character, or the respect that Parkour Generations has within the community, or the fact that people are used to seeing traceurs jumping around on stuff, or maybe people just have better things to do here, but I haven’t seen the crowds that this sort of activity would generate back in the States. Sure, we have the neighborhood kids that will stop a football (real football- not American football) game to watch some big jumps, but to a large extent people react in the same way that they would to a group of people playing pickup basketball or kicking a football around. We also haven’t encountered much of the animosity that I was expecting. In the past 5 weeks I have only encountered one disagreeable property owner that asked us to leave (we were on public property, but left anyway), and the police here don’t seem to bat an eyelash when they pass us training. Maybe I’ve just gotten lucky, but I suspect that there is something different here, and it’s something that I’d like to duplicate back in the States if possible.

Some other random observations that I’ve made while I’m here:

- Cultured?: Scratch the ads for Coke and Pringles in the subway, I’ve been astonished by the number of ads promoting book releases and museum exhibits here. If it wasn’t for all the beer ads I’d say that they were more cultured….
-The lack of trash cans: apparently due to fears about them being used as bomb receptacles, but surprisingly London seems as clean as Paris, and certainly much cleaner than Boston or NYC.
-Museums: Museums are free here, which is great, so instead of slogging it out in the National Gallery to justify the ticket price, it’s great to go to an exhibit or two before escaping to the sunshine.
- English: Supposedly we speak the same language but there have been a number of times when I feel like the person on the other side of the counter is speaking vastly different. The jury is still out on whether the English women like the neutral American accent…
-The pound (£): the exchange rate sucks and is getting steadily worse- enough said.

-Londoners: they seem to be a pretty cultured lot, or at least like visitors to think so, with lots of billboards for book releases and museum exhibits in the Tube stations, and a prominence of bookstores throughout the city.
-French: I think that most of France comes to London at some point during the summer, since I seem to hear French as much as I hear English here (which isn’t helped by the fact that it took me 5 days before I met any actual “Englishmen”.
- The weather: My month in London has coincided with lots of sun and a drought, a phenomenon that I’m assured will not continue, but I think that it’s rained about 5 times my whole stay. 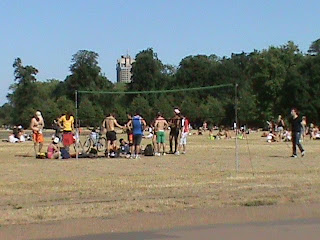