I spent my first full day in DC visiting the Urban Evolution gym and training with the guys there.  The setup of the gym there was by far one of the coolest ones that I’ve seen in my travels, from the brilliant graffiti that adorned the walls to the sheer amount of “stuff” that was packed into the gym.  The set-up included a number of elements that I hadn’t seen in other gyms, some of them, like the warped wall or the “ladder” were easily recognizable from American Ninja Warrior, while others, like the “floating platform” hanging from the ceiling in the middle of the gym, seemed like something directly out of some little kid’s dreams of an ideal play-space.  I spent a lot of time talking with Salil, the owner of the gym, about his company, his roots in the DC parkour scene, and his plans for the future of Urban Evolution.  It was really interesting to hear about the growth of a parkour scene in my own country and I was surprised by how similar it seemed to the stories I’d heard in other countries, despite my country’s penchant for commercialist exploitation of just about anything. 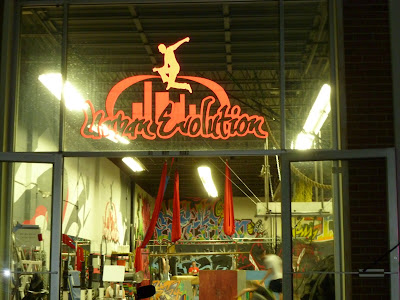 I stayed at the gym for most of the day to get an idea of the way things worked at the gym.  This allowed me to see some of the parkour classes that were run at the gym as well as the other classes that were offered there like aerial arts, breakdance, and jujitsu.  One of the most appealing elements of the gym was the versatility that it offered, with the capability to host parkour jams, American Ninja Warrior contests, obstacles course challenges, circus classes, breakdance jams, and all manner of other events- all while also providing a safe and challenging place to train that could be manipulated and changed to ensure that there were always fresh challenges.


While my experience over the past year and a half had prepared me for it, I have to admit that I was somewhat surprised to find that the “parkour politics” in the USA are just as lively and divided as they are in the other countries that I had visited.  Similar to the situation in nearly every major metropolitan area that I’ve visited, DC has different “factions” that operate within the same city.  However, I was happy to learn that unlike some cities I’ve visited, the grudges didn’t seem to extend past the original participants (as in nearly every case, the founding generation), and on the whole the DC parkour community seemed pretty cohesive.  That being said, my visit only allowed me to scratch the surface of the scene there, so I’ll have to leave future observations for another time.  I also didn’t have time to check out any of the outdoor spots in DC, which is probably my biggest regret from the trip, but inevitable since I was only spending two and a half days there.  Guess I’ll just have to come back…
Posted by Blake Evitt at 3:54 AM