The bus ride from Brasilia to Salvador was one of the longest rides of the trip, but probably one of the more interesting ones as I was able to watch the dramatic change in landscape between the flat and deserted region around Brasilia and the lush green coast of Salvador (and feel the noticeable rise in temperature).  Upon arriving in Salvador I met up with Gustavo “Tortuga” (his nickname comes from the fact that his back is so wide and muscled that it resembles a tortoise shell).  While definitely more of the strong silent type than a lot of the other Brazilian traceurs that I met during the trip, Gustavo was a lot of fun to spend time with and his family made me feel totally at home throughout my stay.  I also found that despite his very calm and “Bahian” demeanor, Gustavo is ridiculously strong and a very skilled traceur, and we also seem to share a rather strong affinity for traveling.  The 15+ trips to different parts of Brazil that he took last year (all parkour related) make him one of the best-traveled traceurs that I met in Brazil, although I was surprised to find that this traveling had never breached the national border.
My first full day in Salvador was spent as a “recovery day”, although I ended up walking about 10km exploring the city (mostly because I refused to take a bus- still not quite sure why though).  Throughout the day I was struck by how much more this part of Brazil seemed to fit the image of the country that I had been expecting all along.  While this can’t be attributed to a single factor, the combination of architectural style, climate, people, and general “Bahian” attitude made for a much different atmosphere than the rest of Brazil. 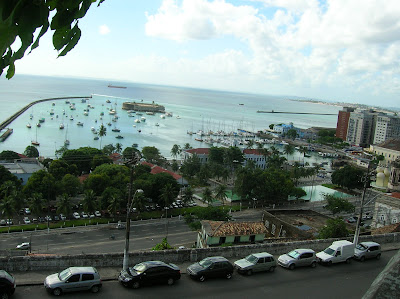 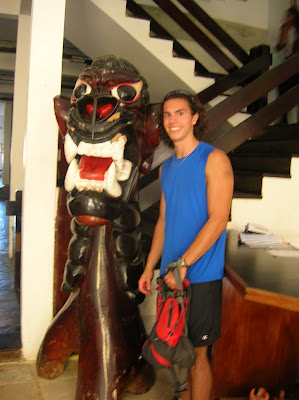 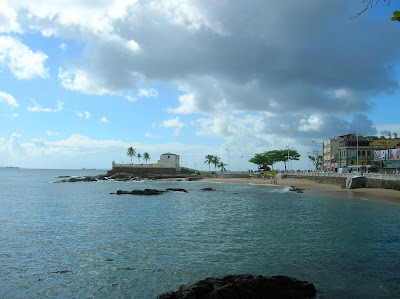 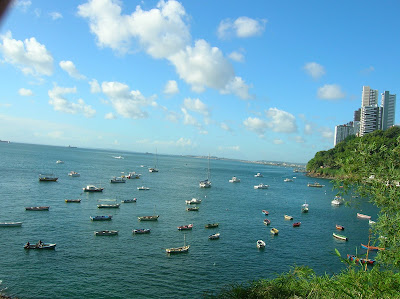 I found that the Salvadorian traceurs seemed to embody this difference as well and while the stereotype of the “lazy Bahian” isn’t quite accurate, the training sessions in Salvador had a much more relaxed pace than in the other cities.  One of the guys favorite activities was a sort of tag/follow-the-leader game in which all of the sudden one guy would dash off and start making his way through a series of obstacles.  Everyone else would drop what they were working on (or not working on) and join the chase.  The game often seemed to end as suddenly as it had started, with no goal or endpoint that was ever apparent to me.  The training would then resume the same “chill” pace that it had had before, with no visible difference to the outside observer.  While the Bahian method doesn’t exactly fit with mine (I’d much rather train hard for an hour or two and then hang out- I don’t like to mix the two),  it does allow the guys to train for long periods of time, often spending most of the day training (often doing the same things that I would have done in an two-hour training session).  While this attitude could be frustrating at times, it was probably better for my body, as I was starting to feel the toll from the combination of seemingly nonstop travel, 2 months of hard training, few recovery days, and lots of different nutritional styles.

The guys that I met in Bahia were a really good group of guys and were a lot of fun to hang out with.  There was a really close family atmosphere amongst them that seemed to come from the natural Bahian friendliness as well as the inordinate amounts of time that they spent training together.  While they were definitely one of the younger groups of traceurs that I had met in Brazil, the age difference didn’t seem to affect their skill level, although the maturity level of the jokes was noticeably lower than some of the other cities (I should admit that I enjoyed this, and found it pretty refreshing actually).
During one of the last days in Salvador Ana and Faluk proposed an “urban rappelling” session with a local group.  Kind of intrigued as to how this would work since I hadn’t seen many tall buildings in the city center, Gustavo and I decided to check it out.  We arrived at the spot to find that instead of buildings, we would be rappelling from a 3 story pedestrian bridge into a green strip of land between two very busy roads.  Not only that, but the group activity wasn’t limited to rappelling, but it also included “kamikaze pendulum jumping” (their name for it).  This involved climbing on top of the pedestrian walkway roof, standing to one side, and jumping off, usually with some sort of war cry.  The rope that was attached to the jumper’s waist was fixed by the other end to a point underneath the bridge on the opposite side, meaning that after a second or two of freefall the jumper would be pulled into a pendulum-like swing under the bridge, while also giving minor cardiac arrests to many of the passing drivers.  While this looked like fun (kind of), I decided to forgo the more extreme version, and went for the normal rappelling off the bridge, especially after having sudden doubts over whether my international health insurance had expired or not, and whether it included kamikaze pedestrian bridge jumping.
-videos and photos of bridge jumping will not be included in this article in order to keep my mother supportive of my travels-
Since Salvador is world-famous for its beaches, the guys thought that my visit to the city couldn’t be complete until I had visited at least one of the them.  On Saturday Gustavo “Tortuga”, Gustavo, and I took the bus to a beach outside the city that really lived up to it’s reputation.  After a morning spent watching the surfers, playing around in the waves, practicing flips in the sand, and watching the local “wildlife” (Brazilian women bring new meaning to “people watching” at the beach) we headed to a nearby spot to meet a bunch of the other guys to train for a few hours.
Saying goodbye on Sunday after the training session felt really weird because for the one of the first times this trip, it was more of a “see you in a few days” than “see you sometime in the maybe-distant future” since I would be reuniting with them in a few days at the Encontro Nordestino in Aracaju...
Posted by Blake Evitt at 9:23 PM