My second visit to Rio gave me the chance to really get to know the parkour scene in the city.  Since I was staying with PC, one of the local traceurs, I was able to get a much better perspective on parkour in Rio than during my first visit when I was living in a hostel.
During my first few days in Rio I spent a lot of time training and exploring the city’s “spots” with “Raxaman” and JC (younger brother of JJ).  Raxaman was the “first traceur” in Rio and early in his training he was joined by JJ and JC.   Since neither JC or Raxaman were working at the time they were free to show me around some of Rio’s many great places to train, some of them man-made, others for which the credit goes to Mother Nature.

Voltz Parkour
The training session with Gian was a lot of fun, and the Voltz approach to parkour was pretty interesting.  While there is a lot of resistance in Rio at the moment among certain groups to the idea of “paying for parkour lessons”, for me this was pretty standard practice and I liked the way that the Voltz program is set up to allow the “athletes” the options to build skills within other disciplines in addition to parkour (acrobatics, aerial silk (the curtain thing), climbing….).  Gian and I got the Voltz training area pretty much to ourselves for the training session, which was really nice since I was able to take my time to learn some new techniques from Gian.
One of the things that impressed me the most about my meeting with Voltz is how "commercialized" they are.  Perhaps this appeals to the "American" side of me (for better or for worse) but I liked how well-run and professional the company seemed at first glance.  While I obviously didn't have time to really get to know the group or the way they worked, my first impression was pretty positive.  Checking out thier blog HERE, it also seems like they're doing a lot of good work with the younger generations in the Rio area.  When I visited, they were all still pretty fired up about their debut in Rio's Carnival (a huge deal, especially since they won an award).  You can see part of the video below:


Omnis Parkour
While in Rio I spent a lot of time with the guys of Omnis Parkour (Raxaman, JC, JJ, and PC are all part of this group).  This is partly because JJ was my first contact in Rio, and also because I really connected with his style of training (One of the "older practicioners" in Brazil, he has realized the importance of a solid base of conditioning in the "long-term parkour plan".  Throughout my time in Brazil I interacted with a lot of groups and I have to say that the Omnis methodology is probably the "purest" that I saw.  Not only do they fight to keep classes and events free so that everyone can participate, but they seek to include all skill levels in their training events, and they really make an effort to draw the shyer or less-confident practicioners into the session.  Here's a clip to get an idea:


Saturday I met with the guys for a really great session in the community of Santa Cruz, a short train ride outside of Rio.  A number of traceurs came from around the region to join in, making for a really great atmosphere.  Unfortunately I was feeling pretty out of it after almost 2 weeks of almost non-stop training and a late night on Friday exploring the Lapa (the party area of Rio) nightlife with PC and his roommates.  The queasy stomach and lack of strength got worse during the day and by the end of the day I was feeling pretty miserable.  Despite that I rallied a few times throughout the day and managed to get some good interviews with some of the guys before we headed home.
I tried to rally again on Sunday for the last training session, held in the Lagoa Rodrigo de Frietas area, which turned out to be the perfect place for parkour.  However, by the time we got there it was clear that I wasn’t in a state to be doing anything so I lay down on the nearest bench and napped for most of the afternoon.  The guys were really great about the “sick gringo”, bringing me coconut water to help keep hydrated, and keeping my spirits up.  Unfortunately I didn’t get any pictures of the spot, which was pretty unique, and in my mind was the best parkour spot in the city, simply because of the huge variety of things to train there (think of a movement or technique and there was a place to train it in all levels here).

A big shout out to PC, JJ, JC, and Raxaman for helping me through one of the lower points of my trip! 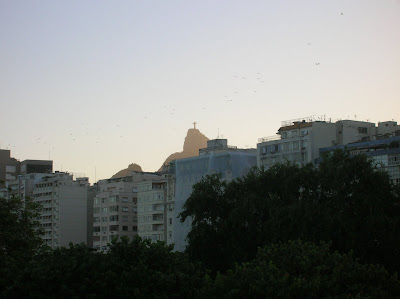