An abandoned resort and other adventures on Koh Tau

The overnight night ferry ride to Koh Tau was a very enjoyable one, despite the fact that we all woke up at some point or other in the middle of the night to feel the boat pitching and rolling underneath us in what seemed like monstrous swells.

We arrived unscathed in Koh Tau at 5am and managed to dodge the swarm of blood-sucking taxi drivers that awaited the bleary-eyed tourists coming off the boat.  After hanging around on a corner to figure out a gameplan, we started by finding a great little place that offered good, cheap food, with free wifi (this place became a regular dining option for us).  We then found a great place to stay at a really low rate, and even managed to rent scooters before lunch (we had become hooked on the range and flexibility that scooters offered us.  All-in-all a productiveness that was tough to match for the rest of our time on the island).

We spent much of our time on Koh Tau speeding up and down the small country roads along with the rest of the small army of scooter-mounted tourists (mostly divers) that inhabited the island.  Although we did some bouldering, the weather or the environment conspired against us on most days so we ended up doing a lot more exploring than anything else.

The abandoned hotel pictured below was one of the best adventures of the trip and was something that we essentially stumbled upon after someone had mentioned it briefly in passing.  Although it has only been out of operation for a few years (it was actually owned by the woman who owned the place we were staying in on the other side of the island) nature was gradually reclaiming the area, especially the only road through the hills to the resort.


There were also some great rocks right next to the resort so of course we couldn’t resist the chance to climb and jump around on them.

Of course, being on an island, we also spent some time hanging out on the beach (both in and out of the illusion of training). 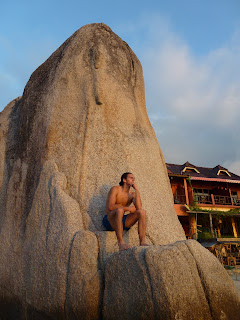 After nearly a week on Koh Tau, it was time to head back to Bangkok to meet up with the rest of the PkGen crew the official launch of PkGen Asia at the Queen’s Imperial Hotel...
Posted by Blake Evitt at 1:44 PM