So after a brief visit to Padova to have a bit of “vacation” time with some close family friends and a day spent sightseeing at Venice (it was cool, but not nearly as interesting as people make it out to be), I took the train to Schio, Itlay, a few hours outside of Vincenza.  I had met Giovanni and his brother Luigi at the ECCE event in Rome and they had piqued my interest talking about a “park” they had built.  Although my schedule for the rest of my time in Italy was pretty tight by then, I found a way to squeeze in a flyby visit as I was en route to the Venetian airport for my flight to Denmark.

Upon my arrival at the Schio train station in the late morning, I was hit by a sudden wave of uncertainty that often accompanies meeting new people and being in new environments.  This wave was partly due to the fact that I was still adjusting from an intense weekend with family friends in Padova, I really wanted to get to Denmark where I’d be able to finally “settle down” for a few weeks, and can also be attributed to the usual fatigue that comes with constantly being on the move.  From the train platform, the town looked sleepy at best and very different from the bustling urban centers that I had been exploring throughout most of the trip.

Most of these doubts were banished the moment that Giovanni showed up and we drove back to his house to grab some lunch.  After dropping my stuff off and inhaling some food, we jogged over to the facility while his younger brother Luigi rode alongside us on his bike “encouraging” us.

Any remaining doubts that I had were banished forever when opened the front door of the “training facility”, called the Krapanonne.  Once again the combination of lady luck and my growing “parkour globetrotter instinct” had been proven right.  Unfortunately my pictures from the visit are lost in the abyss of electronics that is my failed digital camera so I don’t have much to show for this section of the trip besides images I’ve taken from their site.

The facility is housed in a nondescript, industrial-looking building with a small bright red door, set in the middle of a strip mall that seemed semi-vacant.  As Giovanni opened the door, I caught a glimpse of the best indoor parkour training facility that I had seen on the trip.  Entering the Krapanonne felt like entering into some surreal and impossible parkour paradise.

First of all the Krapanonne is HUGE.  While I’ve seen a few warehouse/garage-based parkour facilities, the Krapanonne’s building might be better described as a small airplane hanger.  Despite the Spartan furnishings, it’s also very well lit, which seems to make feel even bigger and more inviting.  The simple fact that KRAP has this much space to work with allows them a lot of flexibility in what they do and how many things they can have going at the same time.

The second thing that struck me as I entered was the “rawness” of the space.  All of the construction and renovation work had been done by the members of the association, and the result is that most obstacles and set-ups look and feel like they have been made by people that actually use them.  This is also a distinctly unpolished feel to the facility, a sharp contrast to the only other facility that I’d heard of that might rival the Krapanonne, that of Tempest Freerunning (I haven’t been there yet but am hoping to visit this fall). The result is that the space feels like it’s in a constant state of change and evolution, as new sets and “toys” are built in the workshop at the back of the building.

The center of the facility is dominated by a huge ramp and scaffolding that border an enormous foam pit that looks like it could hide a small army, or at least a large monster, beneath the surface.  The setup allows for a huge range of training environments, for parkour, as well as skating, bmx, skateboarding…. 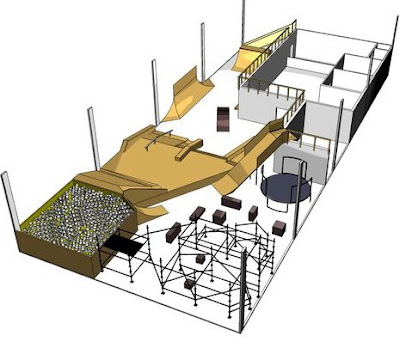 In addition to the great training environment, the Krapanonne also functions as the KRAP World Headquarters, and so is equipped with a full kitchen, (with optional bar setup), viewing platform/raised reception area, fully-equipped dance studio (used for children’s classes in dance, gymnastics, and “movement”), a decked-out media lab, and some very Spartan living quarters.


The back of the facility is devoted to a workshop of sorts that seems to be constantly spewing out all sorts of cool additions to the Krapanonne.  These can be useful- like the skateboard racks that I watched being manufactured for a “store” being built on the viewing deck, and “not quite so useful”- like the giant space-invader figures that were built for the KRAP Invaders event (more on that later) but now seem to materialize at most KRAP parkour events.

After ooo-ing and awing at the space for a while I took some time to film one of the “Natural Movement” classes that KRAP offered to kids ages 3-8.  The class was a lot of fun to watch and I was reminded again about how similar kids are all over the world and how naturally we resort to many of the movements that are at the foundation of parkour.  The guys explained to me that the class was designed to teach all sorts of movement, including elements from dance, gymnastics, parkour, and yoga in order to give the kids a basic understanding and control of their bodies.  After being inspired by the kids in the afternoon I took some time afterwards to play around on the scaffolding and foam pit and take advantage of my amazing surroundings, despite an aching and tired body.

After resting up for a bit we prepared for the adult parkour/freerunning class later that night.  As the official “gringo” and newcomer I was invited to lead the warm-up for the class, and based on a lot of the reactions that I got mid-way through it, I suspect that most of the people hadn’t been exposed to the same level of conditioning that I’d gotten used to with Parkour Generations.  That being said, the guys adapted well and the rest of the class passed in a flurry of trying to observe everything while also trying to participate to the maximum.

Once the class was over, I retired to the “lounge” where I did an official “KRAP interview” about my travels.  Apparently they interview all of the foreigners that come to train with them, and I was told that at some point the interview would be put on their Youtube channel, although the English-Italian language barrier promised to make editing difficult.  I also got a chance to do my own interview of the management team, and learned a lot about the organization, how it started, how it worked, and some of their future plans and ambitions.  I left the session, which became more of a friendly discussion by the end, in a daze around 1am, when I realized that I had to be up and on a plane to Denmark a few hours later.

I’ll pass along the basics of what I learned, for more information, and for some awesome videos, check out the KRAP YouTube channel.  The “KRAP Assc.” was founded in 2008 with the goal of giving youth in the area the opportunity to practice various freestyle sports in a safe and constructive environment that emphasized the values at the core of most of the sports.  One of the key benefits of the membership is that it provides insurance coverage for a number of these sports, including parkour/freerunning, skateboarding, skating, bmx biking, snowboarding, and juggling.  After the initial success of the KRAP classes and events, the association started construction on the Krapanonne, which opened in 2010.


KRAP runs classes and workshops at the Krapanonne and various hotspots around town for the various sports, and this year is also hoping to start working with a number of schools in the area as well. In addition to the educational side, KRAP also has a developing commercial branch, and “sponsored” athletes are featured in a wide variety of media productions, some of which are coordinated by members in the Krapanonne media lab (example).  The KRAP calendar of events is pretty impressive, and it seems like there is a constant bustle around the place as various events are being planned and staged.  The most important parkour event, called “KRAP Invaders” is a multi day event, that, among other things, features a one-day “invasion” of an Italian city by a small army of traceurs that moves from spot to spot throughout the city over the course of a day.  The event also features a day in Schio that includes jamming on a specifically built scaffolding setup, as well as an afternoon “cliffdiving” in a local spot.  The videos for these events are pretty awesome in and of themselves, and feature an impressive roster of traceurs from around Europe...

A big thank you to Giovanni, Luigi, and Jessica for their amazingly warm welcome into the KRAP family. 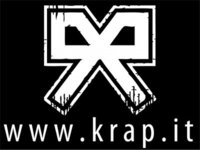