One of the more interesting aspects of parkour in Melbourne has been the opportunity to meet Alex Pava, who I met during my very first outdoor training session in Melbourne. Alex was initially introduced to me after Chippa heard about my research and basically said, “You’re going around the world “studying” parkour? Wait, we have a guy like that too!” Alex and I immediately had a lot to talk about, especially since we were both attempting to study the sport from the dual perspectives of “observer” and “practionner”, something that hasn’t been done much to date. While Alex’s primary focus is the Australian parkour movement, in a few days he will be starting on the first of his own international parkour travels to Canada, Russia, and France (his travel is broken up into separate segments since he’s a member of the “real world” and has a wife and house he can’t just leave for a year to go gallivanting around the world). One of the most interesting aspects of his research is that not only is he studying parkour, but he’s also a practionner. Similar to me, he’s found that this has allowed him to gain an additional level of insight into the sport.

Alex has extensive background as an artist/illustrator and he’s planning to integrate this into the degree, to (in his own words) “show how the comic (book) medium can be used as an ethnographic method of communicating social data, depicting space, movement and people.” The comics below are some of the most recent episodes of a weekly strip he publishes on the APA website; of which the entirety can be found HERE. 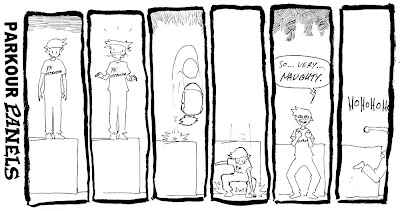 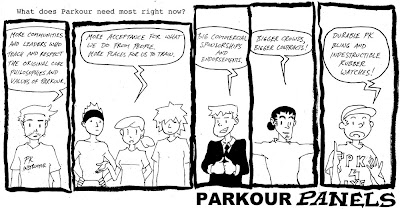 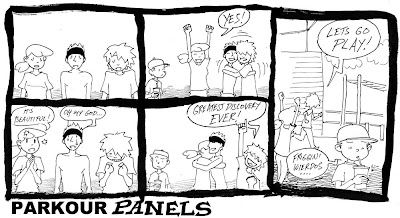 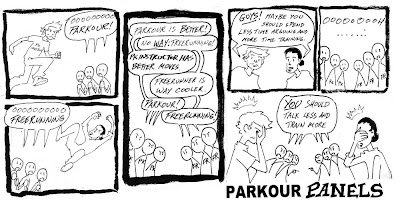 The subjects for the comics are often taken from the debate/conversations that occur on the APA website forum or from discussions during training sessions, and are designed to reflect some of the current issues in the sport and topics of interest to traceurs. Characters aren’t linked to specific personages in the parkour world, although elements have been taken from prominent figures in the sport, or in the APA community. Reading through the strips gives a pretty good idea of some of the discussions going on at the moment in the Australian parkour scene, and of some people’s perspective on recent events in Europe (the increased commercialization of the sport, freerunning vs. parkour, what traceurs get from training…)

Since I’m sure that there are a number of questions about how Alex is getting a “doctorate in parkour”, I asked him to send me some more specifics about the degree:

Aims: The primary aim of this project is to gain insight into the current organizational, philosophical and practical principles of the Australian Parkour movement. This will eventually be used as contrast to global movements, as observed through travel in second year. The secondary aim is to demonstrate the potential the comic (book) medium as an ethnographic method of communicating social data, depicting space, movement and people.

Participants: The participants of this study will be the people who are involved in the Parkour movement as instructors, commentators and practitioners. Most practitioners practice in groups that are united by common philosophical and practical principles. Particular attention will be given to describing various Parkour communities. These vary from highly structured collectives with committees, training facilities and insurance to loose and informal training groups that espouse a distinctive local variant of global parkour philosophies. Participants cover a wide spectrum of age and ethnicity and include both genders. This research will be focused on participants over the age of 18.

Brief Description: This study will be ethnographic and will be conducted through a combination of participant-observation methodologies as well as informal interviews. Online resources and existing academic literature will be used to gain an additional perspective on the international development of Parkour. This will be contrasted against my observation of the Australian, and global, practice of the discipline. Data will be gathered through note-taking, photography and visual notes (sketches).

Methods of Data Analysis: Methods will be primarily qualitative. Written notes, photographs, sketches/illustrations and third-party articles will be collected. This information will be codified and analysed in accordance to relevant themes and standard ethnographic structures.
Posted by Blake Evitt at 1:21 PM